If you haven’t been to PKH before, let me just explain to you what this is! Every participant at PKH 2019 must enter a 18x16 module into this competition. It’s a mandatory, but very low-key competition, and you can put as much or as little effort into it as you like, this is up to you. Of course, we hope that you’ll try to make your entry as good-looking as possible, because all the modules will be placed next to each other in the event hall, creating a long “diorama” - and the more effort you put into it, the better the diorama will look!

Last year, the mandatory build was a train car. That was a lot of fun, but shipping out the parts cost us a loooot of money… so we’ll return to the formula we used for the previous years. After having built beach modules, street modules and river modules, this year it’s time to visit a more rural place - we’re making a walking path!

This is your starting point: 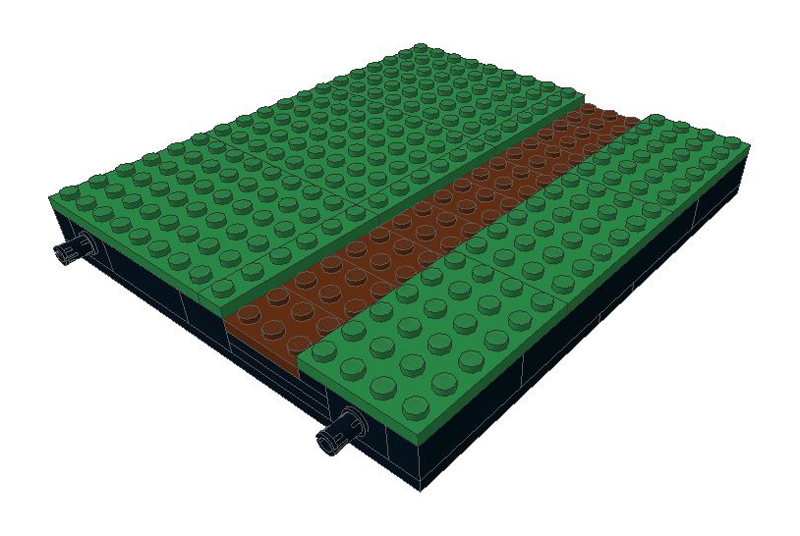 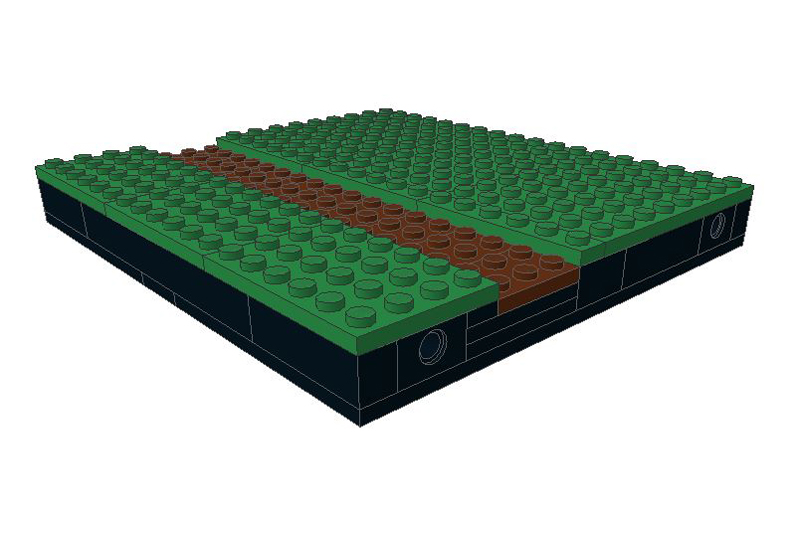 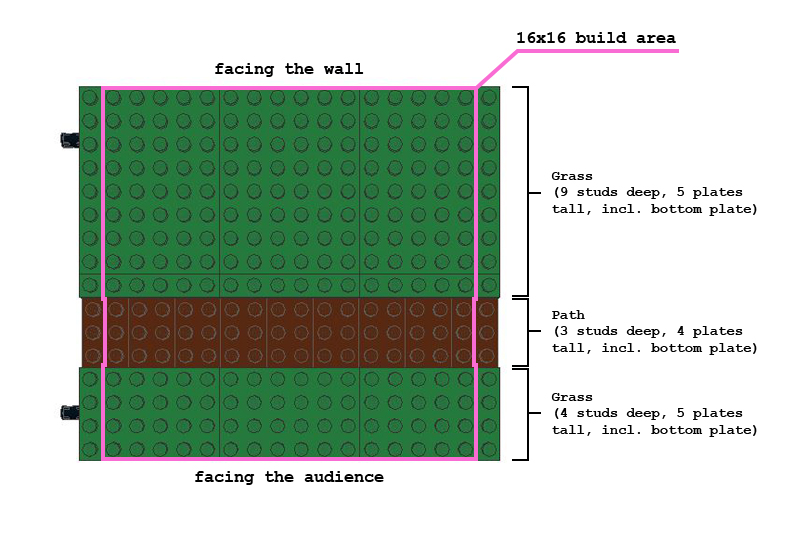 Looks really simple, right? It’s probably the most open starting point we’ve had. But of course we need to have some rules:

[b]1) 18x16 base area, 16x16 build area
2) No overhang allowed, 16x16 is your maximum build area (the modules will be put next to each other during PKH, and probably along a rear wall)
3) The path is reddish brown and 3 studs wide, and placed 9 studs from the rear edge and 4 studs from the front edge of the base*
4) The rest of the surface area is green and 9 studs wide facing the wall and 4 studs facing the audience, or as shown in the picture: bottom plate + 4 extra plates*
5) One - 1 - stud from the rear edge of the module, placed directly on the bottom plate, and one - 1 - stud from the front edge, on both sides, there must be, either: 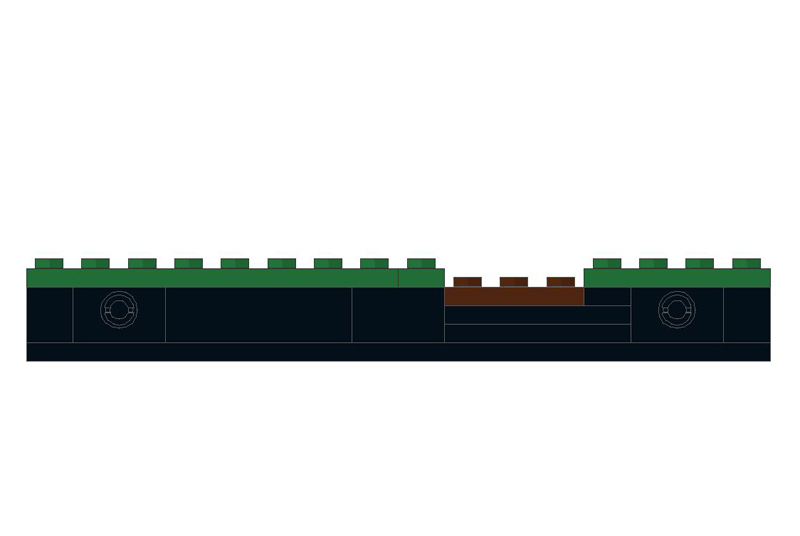 …in order for us to be able to place any given module next to any other module. The same way we’ve done it in previous years.

And 7) You are not allowed to build anything on the outer left and the outer right row of studs. In other words, your available build area is 16x16, even though the base area is 18x16.

That means that the frame for this year’s competition, in reality, looks like this: 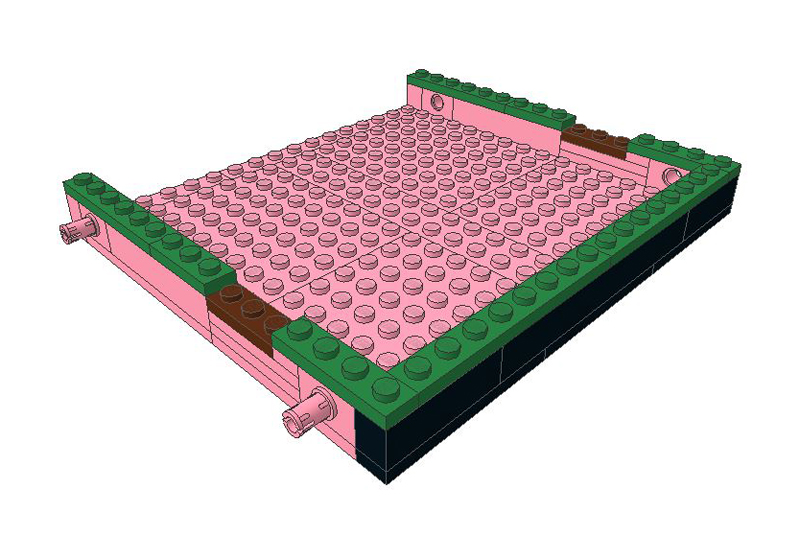 And talking of uniformity: Because we want this to look like one coherent diorama, all entries must be in minifig scale.

So! Let us consider all the possibilities! The module above is only a very bad example, and very unlikely straight and streamlined. But as long as the path itself is placed 9 studs from the rear edge and 4 studs from the front edge, on both sides, it can be just as wide or narrow as you like in between, and the grass doesn’t have to be as wide all along your module. Maybe your path widens into a highway? Or maybe it disappears into a shrubbery, only to reappear on the other side? Maybe it twists and turns a bit? Maybe there’s a big boulder in the middle of it? Maybe it goes through a thick forest? Maybe a spaceship has crashed there? Maybe there’s a big hole in it, or it crosses a stream, or a little hill?

Just make sure that the outer row on each side matches the template above, and that no overhang exceeds your 16x16 area.

And NB! The bottom plate does not need to be two 8x16 plates and one 2x16. As long as your module is solid and doesn’t fall apart, you can use any size of plates you like. The same goes for all other plates or bricks in your module: As long as the outline along the edges is correct, it doesn’t matter what kinds of bricks you have used.

If anything is unclear (it probably is, it’s always perfectly understandable in my own head, but my head has only one inhabitant) please just ask in this thread! No question is too stupid, and there will always be people who are prepared to explain or lend you some bricks. And just like previous years: If for some reason you feel that you’re absolutely unable to bring something like this to Trondheim in late april… just let me or Harald know, and we’ll work it out. But please try!

Just to check, can there be overhang on the outer row, as long as it doesn’t go over the edge? Or over the front?
Any height restrictions? Not that I plan too high but…

And no height restrictions. But keep the model sturdy enough that it can survive for two days on potentially unsteady tables!

All models will be put up on display no later than Saturday morning, and Major Espenes will, with military precision, verify that all models are within the rules!

Does the path have to be brown

Does the path have to be brown

Yes. But not necessarily all the way through, you could for example turn it gradually into tan or a different colour, as long as it turns back into brown before the edge of your module. Does that make sense…?

If the rule still applies?

That is correct. When all the models have been set up on the table, somebody will look them over and check that they don’t break any of the rules - and if they do, the builder will be notified of what the problem is so he/she can fix it onsite. If fixing it onsite is not possible, the model will be disqualified.

men minner om reglene: «And talking of uniformity: Because we want this to look like one coherent diorama, all entries must be in minifig scale»…